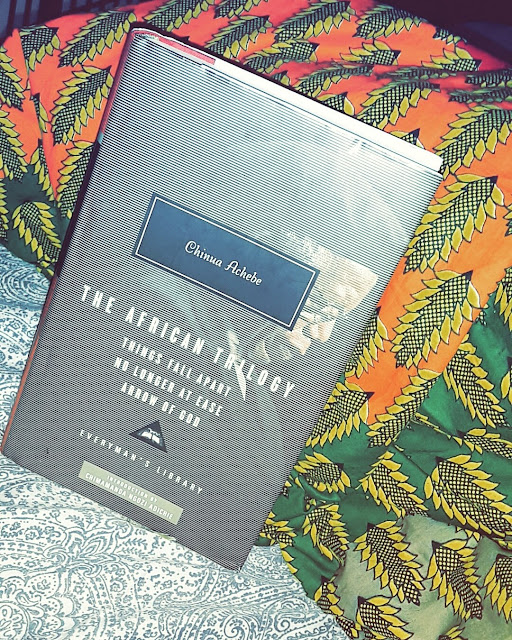 I was in High School when I read the French translation of Things Fall Apart for the first time. I recently read it in English and it is much better. I don’t meant it just because it is the original version. But also because I believe I read at the right time. I think the way we perceive a book depends a lot on the period of our life at which we read it. When I firstly discovered Things Fall Apart, I wasn’t much impressed. I preferred stories about things I could easily identify myself. I didn’t realized how important it was to know the story of my people.

When he saw me reading Things Fall Apart, a Nigerian student at my university told me he did not think that he could learn anything from fiction books. He prefers academic books about business, history, politics, etc. I tried to explain that novels like Things Fall Apart need to be differentiated from fantasy. They are stories based on reality. For me it is much easier to learn certain things – especially in history – when they are put in a novel. But obviously, tastes are not supposed to be debated on…

If you haven’t read it yet, please buy Things Fall Apart before even finishing this article. One of my classmates, also from Nigeria, said she didn’t understand all the attention the book caught. I too didn’t understand first. But I had the opportunity through some of the speeches of Chimamanda Ngozi Adichie, and by reading some texts of Chinua Achebe himself, to understand the importance of Things Fall Apart. The novel came out at a time when few books were written by Africans about their life before the White men. As a university student, Chinua Acheve studies several novels written by Westerners that depicted Africans as savages who have been saved by the arrival of the Colonizers. With Things Fall Apart, we enter the daily lives of Igbo. We discover their traditions, customs, both good and bad and the upheavals caused by colonization.

Okonkwo is a brave warrior of the village of Umuofia. His greatest fear is fear itself. He has no tolerance for weakness and keep a bad memory of his own father. Okonkwo’s life is dedicated to work and the acquisition of titles. He severely runs his household and desperate to see his son Nwoye follow his footsteps. Okonkwo wishes that his daughter Ezinma, who has more in common with him, was born a boy. After an accident that led to the death of a member of the village, Okonkwo goes in exile with his wives and children in his mother’s village. During that period, the English settle in the country and his son Nwoye becomes a Christian. Okonkwo returns to his village 7 years later and discovers that the white man has installed his government and religion. He finds that the brave men of Umuofia have softened. The pain of seeing his son joining the foreigners is nothing compared to the humiliation that he and his peers suffer. The others may have decided to submit to the English but Okonkwo does not intend to let it go...

There are so many things to say about Things Fall Apart. Achebe wrote without subterfuge to show that indeed there were things to change but Africans did not live in the state of nature. The African society was shaken not only by white men but also by the house Negroes who were even more zealous that the colonizer. Some settlers as Father Brown respected the natives. But there were others like Reverend Smith who did not believe in compromising with Black people.

While reading Things Fall Apart, you laugh, but you mostly feel anger, sadness and frustration while closing the book. Someone comes to you, turn your children against you, insult you, beat you and then feel offended when you react. The story is in a context well before the birth of my grandparents. But you just have to open your eyes to see that colonization continues, just under a different form…

Do I need to add that you should read Things Fall Apart?